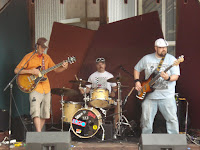 We played Park City on the 2nd to last night of the tour. The club was called The Downstairs.

We had a strong turnout at the show. Some people that had seen us the night before @ Mountain Stages came down to the show. We had one over enthusiastic fan that tried to get a hold of the microphone. We all had a great time and had a good response at both shows. I look forward to returning to Park City soon.

We headed out of town after the show toward Wyoming. Eric has a friend with a cattle ranch just outside Utah. We stayed there to get a head start on the trip to Fort Collins,CO.
Posted by Jason Humphrey at 5:28 PM