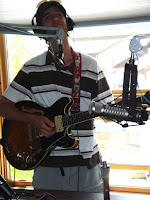 We had a good drive to Steamboat Springs, CO yesterday. Rained a little bit on us as we went over Rabbit Ears Pass also mixed with some snow.

We arrived in good time and had three hours of rehearsal. We finally called it a rap about 10 or so.

Today Holden had to start the day by having his alternator replaced. We made it just in time for a short sound check and then we were off to KFMU (Radio Station) to play in studio and do a short interview.

I'm hanging out in the condo that is attached to the club pre-show.

I have pictures of everything, but forgot the cable to hook it up to the computer. I'll pick one up in the next day or two.